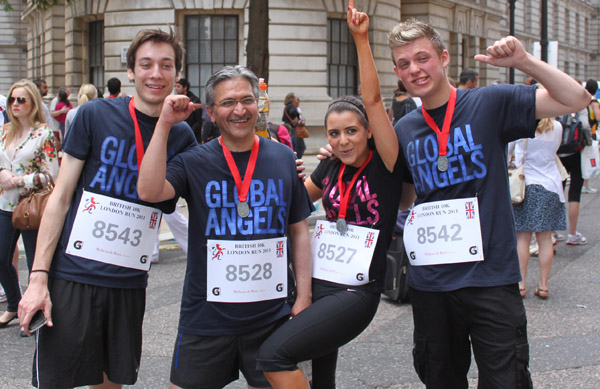 A team of 30 ‘Angel Runners’ completed the British London 10k Run in support of Global Angels. On Sunday 10th July our team ran over 6 miles through the centre of London alongside 25,000 other runners, all sporting Global Angels t-shirts as they powered to the end.

An amazing achievement for our whole team: Our fastest runners came in at 47 minutes from the guys (from Currency Solution’s Tien Tran) and 49 minutes from the girls (Sophia Anastasiadis). All of the runners finished in less than 1 hr 30 minutes: an amazing feat, especially on such a hot summers day!

As the first Angels In Action running event, we are off to a great start. The atmosphere on the day was amazing with a huge sense of team spirit and support of Global Angels. Our runners have raised over £1400 so far and the sponsorship keeps on coming in. You can check them out and sponsor here.

A special mention also to Global Angels team ‘3 Peaks The Hard Way’ (find out more here) who used the 10k as a warm up for their 3 Peaks Challenge later this year – they completed the run as they will be completing the 3 Peaks – with a crippling 30kg backpack on!

We would also like to say a huge thankyou to K-Swiss who sponsored the team with some of their amazing running shoes – We had brilliant feedback on the trainers from all the runners commenting on how much they loved them and convinced they had ‘go faster’ stripes on them which helped the team achieve their excellent times!

We are on the lookout for some more sporting events to take part in soon and hope even more Angels will join in next time!

We have some great photos, below, with thanks to Koroush Mazaheri-Asadi for all his efforts in catching the runners on camera!